. Selected Bibilography
Posted by LENAPE LAND at 4:52 PM No comments: 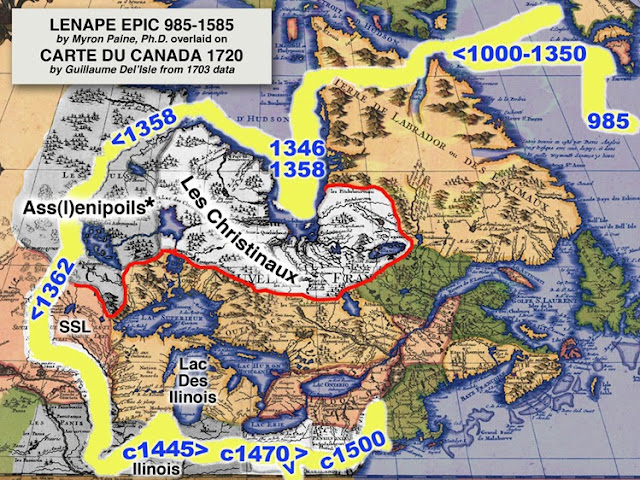 LENAPE means to "abide with the pure."

The word "Lenape" was first used 880 years ago by a Roman Catholic Bishop who abode in North America.  About 660 years ago 4,000 Lenape in Greenland began a 150 year, 4,000 mile migration to the Atlantic coast of North America.  Their route was over the ice to James Bay, west to the Nelson River, south to the Missouri River, east across the Mississippi River, up the Ohio River, over the Alleghenies, and then they spread along the Atlantic coast from northern New York to the Carolinas.

In 1708 when the data for the Carte du Canada were collected, the Lenape, who lived the ethics of Christ, occupied more than twenty times the area of the European Christians who carried guns.

This blog will focus on the story of the Lenape epic.  But first, viewers will appreciate the epic more if they have a workable mental model of North America as it was at the time the epic started.  So this blog will begin with the time before the Lenape.

If you wish to jump directly to the Lenape epic, then read Ancient American Magazine issue #90
or study the Lenape Epic in Migration & Diffusion.

PLANNED TOPICS
Posted by LENAPE LAND at 3:33 PM No comments: