The 17th century WASP and Catholic hatred resulted in three poisonous paradigms that changed the paradigms for the"winning of the west."

"Savages" was in the minds of all men who pulled the triggers on the guns that won the west.  But many of those "savages" were Christians.

The WASPs wrote that "The Vikings came to L'anse Aux Meadow, stayed a few years and had no impact on America." In fact, the Americans in the eastern one half of North America speak Old Norse and have Northern European DNA.

The WASPs also wrote, without evidence, that"All of the original natives walked over the Bering Strait tens of thousands of years ago."  In fact, the Norse rowed in from the east 1,000 years ago.  Most of the Cherokees came to America from the Mediterranean  after 1615.

All of the orthodox history statements have not been supported by valid evidence.  Evidence continues to be found to support the hypothesis that the Americans in the eastern North America came from the east, spoke, old Norse, and carry Northern European DNA.

THERE IS SOMETHING WRONG WITH NORTH AMERICA HISTORY.

The 17th centuryWASPs exterminated the Catholics, Norse Christians and Cherokees. Then, when the new Catholic King of England, James II, created the Dominion of New Englang, the WASPs resorted to the poisonous paradigms to hide their evil actions.  Further they began a suppression of history by omitting evidence of Norse in America.

The paradigms swiftly became institutionalized. The WASPs had the only printing center in North America. The classrooms of each WASP church eventually became the model for the U.S. educational system.

Paradigms are a mental model of the world.  But a set of poisonous paradigms still exist.  These paradigms are used by the schools to teach 13 million school kids/per year that:

there were no Norse in America,

all "Native" Americans came over the Bering Strait,

all "Native" Americans were "Savages,"and

even today all "Native" Americans are less civilized than Europeans.

"Maintenance of catholicism is much more problematic and should have been well noted by the French who introduced Catholicism into just this country at the same time as the English were setting up their colonies. Whatever was maintained it had to survive 500 years of separation without the benefit of trained clergy. It will be interesting to piece together."

See THE WASP EXTERMINATION OF CATHOLICS

LET NONE DARE CALL IT LIBERTY.

THE BEGINNINGS OF CATHOLICS IN AMERICA

IT ALL STARTED IN GREENLAND

THE LENAPE LEFT 18 CHURCHES BEHIND

SOME LENAPE KNOW THEY WERE CHRISTIANS 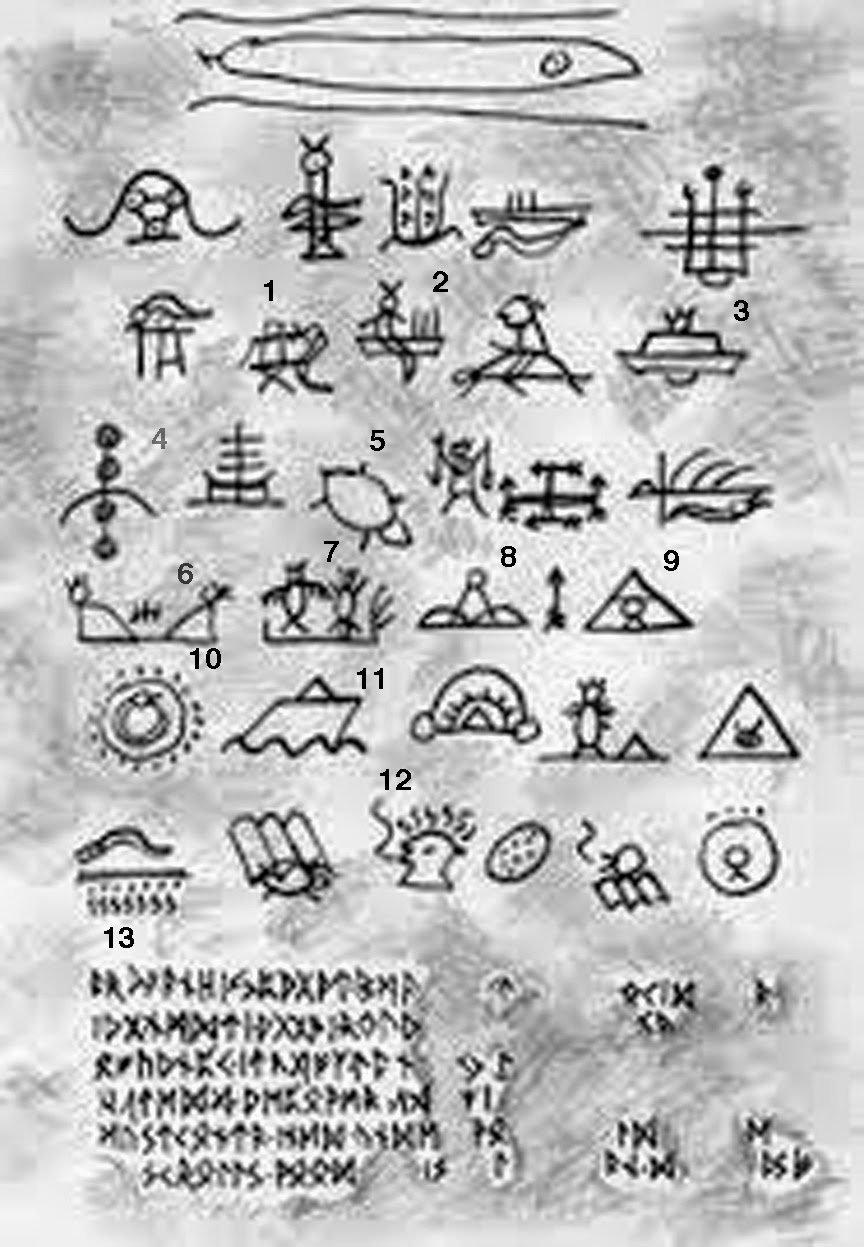 I was scanning the many, many images that google's bots had found for LENAPE, when I spied the image above.  I noticed immediately the Lenape pictographs and the Norse runes.

For about a decade I have been looking for more positive evidence that the Lenape had Norse ancestors.   This image appeared to offer the most positive evidence without convolutions and serious study.  I believed I had "hit the jackpot."

But the deciphering procedure is convoluted.  A person deciphering the Maalan Aarum needs months of serious study before they are willing to accept Rieder T. Sherwin's conclusion that "the Algonquin Indian Language is Old NOrse."

There are two styles of Norse runes, and some variance. The Norse runes found in America are of the older version which was replaced, in Sweden, with a newer version in the ninth century.

Few people, especially those repeating the pre-colonial myths, consider that Norse, many of whom speant their lives at sea, could ROW to America in 20 days.  No stage from land to land was longer than six days.  They lived off fish and birds.  The fresh water supply needed for six days fit into the water barrel in the rear of a Norse boat.  Scurvy, the curse of colonial SAILING ships, was minimized by the green plants found on the lands only six days apart.

Yet, solid evidence, punched into stone, has not been considered worthy of print in history books. The paradigm of the history books is that the WASPs arrived at a pristine wilderness.

I find it reassuring that the name "Kensington" means in Old Norse "Kins' place town."  The town in western Minnesota is still known by that name. The town's location between the former Lake Alexandrina and the Chippewa (ship way) River is on a high, dry location where the Lenape--Norse Christians-- may have laid the bones of their kin to rest.

But to return to the document discussion, I thought someone in the past must  have put pictographs and the runes in the same document for a reason.  I was correct.

Troy Swain wrote to me: "I drew it based on Lenape pictographs. Originally, I wanted the players who had characters who spoke Lenape to decipher it."


The comments below are keyed to the numbers on the image above.
EVE
1.  Eve and the serpent.  Most of you know that story.  The Lenape in America knew it by memory 1,000 years ago.
17 THINGS2.
God drove Adam, Eve, and the Serpent from the Garden of Eden.  The long tongue hanging down from God to earth had seventeen marks across it.  Those lines were to remind the storyteller of the seventeen bad things that humans would have to suffer in life.
Things like:  to woman. I will greatly multiply your sorrows.  Those sorrows included pain at childbirth and serving men.
ARK LANDS
3. The Ark lands: The water ran off, the earth dried, the lakes were at rest, all was silent, and the mighty snake departed.

LENAPE PICTOGRAPS
4 & 5:  These two pictographs are not in the Walam Olum, which implies that Troy was using a different source of pictographs.  He called them “Lenape pictographs” when the rest of the world knew the pictographs as the Walam Olum.
LENAPE TO AMERICA
6. The first Lenape come to America:  This pictograph is a key pictograph.  The Lenape rowed to western Minnesota and saved themselves from an environmental disaster in Greenland.
BISHOP MISSED

Bishop Erik Gnuppson was a man used to motivating other men.  His friends, who were many, called him “Henrico.”  Based upon Bishop Gnuppson’s performance in Greenland, he almost surely built a church somewhere in America.  His followers almost surely named the church “Henrico.”

8. Paul Knudson from Norway: The head with feathers was a symbol of a Norse Prince.  Norse princes were Christians.  They wore feathers not horns.  Do you know any other people who wore feathers?

When Knudson and his boats reached the people migrating from Greenland, the record says “No one turned back from here to there.  No deserter went off yonder.”  The Lenape syllables for “yonder” might be understood as the Norse word for Valhalla.

9. Death of Paul Knudson:  “Most but not all survived” a boat reek on submerged rock.  Knutson’s sword, axe head, and fire steel are in the Lake Nipigon museum in Canada.  The broken sword is the evidence of the water pressure that jammed Knudson’s body against the sword caught between the rocks.

This episode happened about 1360.  Both Lenape histories record the episode.  The original letter sending Knudson on a rescue mission to the Greenland people still exists—online eve n.   The three physical items of evidence are still seen in the museum.  So why do not the histories books at least record the “Norwegian Prince Knudson died in a boat wreck near Lake Nipigon in 1359?

The fact that there is no record of Knudson’s death in the history books has nothing to do with the evidence or the testimony.  The episode does not support the myth that Columbus was first and that America was a pristine wilderness when the English came.  Therefore the historians continue to ignore the evidence and teach the myth.

This is one place were Troy led me astray.  I know, from deciphering the Lenape history, that, soon after Prince Knudson died, Snow Bird took a group of Norse west to the Nelson River.  Then they went south to western Minnesota, where the Kensington Rune stone still sits in a museum.  The Kensington Rune stone is more evidence not in history books.

White Beaver took a group of Lenape and went east and then south.  Medicine Man reports that journey in his book, The children of the Morning Sun.  The round lake at #10 is probably lake St. Jean.  There are 18 dots, probably representing tribes around the lake.

In my book , the Frozen Trail to Merica, I wrote a fictional account of my character visiting Lake St. Jean.  He saw the canoes from 17 tribes.  I think Troy’s pictograph and my story refer to the historic fact that the Lake St. Jean was a tribal meeting place.

The boat at #11 would have fit into the history that the White Beaver group made a migration to the east and then south.  A large boat operated by non-Lenape, the triangle, may have provided the transportation via the St. Lawrence River, Lake Champlain, and the long Connecticut River.  The following pictograph is compatible with a people who believed they were the people of the morning sun.

But the migration of the Lenape historian apparently continued.  I have little knowledge of that migration or the meaning of the pictographs.  Except #12 is interesting.  The pictograph shows what appears to be a man smoking.   But a closer look indicates that a land area was the intent of the pictograph.  It could be Florida with the Mississippi River shown to the left.  Six streams flow north to south above the land area.  There are six observable rivers north of Florida that flow from the North to the south.

Either way, a smoking man or Florida the pictographs may indicate the Lenape migrated to Virginia where the English found them.

Finally, we have a connection with the history you learned.  Most of you know about Pocahontas.  She was imprisoned in the “magnificent Church” for nine months so commander Thomas Dale could have sex on demand.  You were not taught that fact in school, because the 17th century English did not want you to learn the details.

I do not know where Troy got the runes at #13.  We have to assume they were merged onto the pictograph page in 2009.   Troy’s story needed pictographs and ancient script.  The value of the runes is that they caught my attention.  Because of that interest, I have taken better look at the pictographs.  The pictographs for the Atlantic Coast migration are the items of value to be studied more.

Some of the pictographs of the Atlantic coast migration are coherent with the known evidence and testimony of the Lenape History.  So we have added another bit of coherent evidence to the Lenape history, which will be useful when American history is written by Social Scientist faculty, who are truly scientists.

Posted by LENAPE LAND at 9:00 AM No comments: