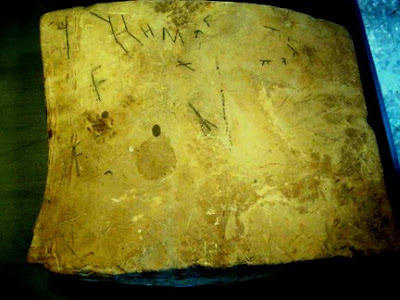 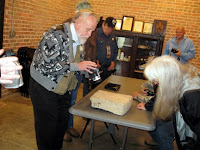 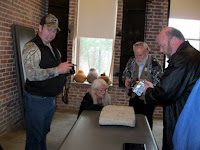 This big picture to the right shows the Smithville (AK) Rune Stone.

The two smaller pictures show the people on the Trip to FAR. From left to right on the left picture are Lee, Charlie, Larry and Freda. The right picture shows Denny, Freda, Lee, and Rick. 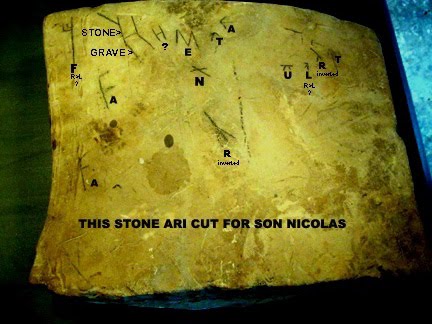 The big picture Above shows the rune stonewith my rune to alphabet translations.
.

The following quote comes from Larry Shroud’s article in the Batesville Daily Guard, February 14-20, 2004.
.
“The late Barry Fell, widely regarded as one of the best epigraphers of all time, investigated and translated the runic inscription from a drawing the Nicholsons [original discovers] sent to the Epigraphic Society of Arlington, MA.


“After an intensive two year investigation into the carvings on the stone, Fell concluded the stone is an American Indian copy of a gravestone. In a letter to the Nicholsons following his investigations he wrote:

‘The inscriptions found on the stone were in use up to 1000 AD. There fore this stone here (Fell means the original gravestone) was cut before, or not too long after this date.


The letters and characters on the stone are of early Swedish type, and apparently were engraved in an S shaped arrangement, a common serpentiform gravestone style found in hundreds of examples in the   of
.


‘The letters, when read in sequence in which they appear on this interpretation translates as: ‘This stone was cut for son Nicholas.’’


When Larry and I looked at the Smithville rune stone in 2008, we came to the opinion that we were looking at the original rune stone.


My belief is that Barry Fell was misled by only the inscription on paper.


After that 2008 viewing I had translated the runes to the alphabet letters as shown in the second big picture above.


The “E” rune identifies the rune set as the Futhark, the earliest known rune set.


There are a few doubtful translations on the Smithville rune stone. Two runes, the “F” and the “L” seem to have marks on the left side. Those marks should be on the right side according to the Futhark's rune set.

Also the rune for “R” is inverted. Somewhere in my studies I picked up the belief that an inverted rune expressed sorrow, so I accepted the inverted rune, although I acknowledge that the “R” symbol in the Futhork rune set is shown inverted. Ari may have been ahead of the rest.

I wondered about “the sequence” Barry Fell used. I finally decided that the “H” looking symbol was really a pictorial drawing of a grave and headstone. That would account for Fell’s words “This stone.”

But how did Fell get the rest of the sentence?
The rune stone was made in the era when a symbol recalled the memory of the whole word. So words are not spelled out for us. We are supposed to remember the whole words the letters represent.

So how are we to remember words we never have heard spoken? Well Sherwin in the foreword of chapter four of the Viking and the Red Man wrote that the “Algonquin Indian Language is Old Norse.”

If Sherwin was correct, we should be able to take the English letter representing the rune and look up all the Algonquin words matching that letter. Then we should be able to pick the words that might match concepts put on gravestones. Then we might use the Old Norse to English definitions to get a more definitive understanding.

We can translate words we have never spoken if Sherwin did his homework right!
“Ari” has to be the “A” symbol on the upper right. Then the reading has to move from right to left. So what does “T E” represent?

There are so many Old Norse words starting with “T” that the “E” must be the second letter of the intended Old Norse word. In the Viking and the Red Man (VRM) on page 198, the word with the best fit to the context is “Telja” which means “to tell,” but the words could mean “to consider” Barry apparently used the words “cut for” as being more precise for a gravestone made “to tell or to consider” Nicholas.

Then on the next line down is the “N” for Nicholas. Things seem to fit this far.
Suddenly Barry Fell’s interruption is complete. Ari could be either father or son, but we have runes left over.

Off to the left, rather like a side note, is the symbol for “F.” There are few “F” words in Old Norse. But “Paafa” is the word for father. Using the familiar form “fa” for father would avoid having to add more runes to define a “P” word.

Below the “F” is an “A”. Now we know who the Father was. We know why Barry put “son” into his statement. There is yet one more “A” on the side of that pointer on the lower left. It appears to be a signature that says, “I, Ari, did the side note above.”

The rune in the center below the “N” is “R.” Barry did not appear to mention that rune. The rune is inverted.

In ?!
ONE THOUSAND years ago?!

The crucifix implies that Nicholas was a Christian! Did Barry really not know the implications of the inverted rune for “R.?” Or did he not believe what he was seeing himself. Or did he think, “My critics are trying to burn me at the stake. Better not add more fuel for the fire.

Proclaiming Norse runes in  is bad enough. Saying that they were a memorial for a Christian man 1000 years ago is much worse!

Nobody in their right mind would even imply the possibility.”

But there are four other runes off to the right. The “T” rune is probably “Taa” (VRM. V1. p.193). “Taa” is a little like the word “the.” In this context it probably means “by.” The inverted rune for “R” probably means the Christian service of Nicholas.

The four runes on the right side may mean Nicholas’ service as a Christian was a glory to God!

In 2000 we might expect a phrase like that, but I did not expect to find that message on a gravestone made 1000 years ago in!

Barry Fell may have translated the phrase differently. If he had a similar translation, he would have been very cautious about a trap. He was working from a piece of paper, which had runes that seemed valid.

But that paper was also an easy way for someone to set up a trap for him up to be greatly ridiculed. If Fell had advocated a Christian in  in the year 1000, well--is there any way the academic society could have treated him worse.

What about me? Am I obsessed with Christians in to the point of finding spirits where there are none?

I do not think so. When Freda explained how stone mason's work could look like Ogam, I accepted the lesson.

I hope that someone can explain where and how I made the incorrect choices of runes to letters and letters to words. When you do, all of us will be wiser.

You can even challenge the Reider T. Sherwin VTM comparisons, but before you can reject his efforts totally, I think you need to show that eight thousand comparisons are not correct.

Meanwhile, I think the Smithville rune stone appears to be an authentic gravestone of a Christian whose life, 1000 years ago in , glorified God.