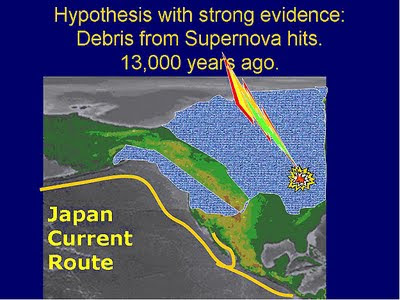 A paradigm is a mental model formed during a person's life time.  Sometimes the forming information is based on beliefs that are wrong or incomplete.  A new paradigm may be a better fit for a new understandings of physical evidence.  One new paradigm, called the BIG EVENT, will help you better visualize the American landscape as it developed before the Lenape began their epic migration. The paradigm of the BIG EVENT includes the evidence that northeast had almost no people 13,000 years ago.
.


[CAUTION!  Controversy area! Wikipedia has described the Impact Hypothesis as “no longer considered viable in the scientific community”.


I was not asked to present my personal experiences where I observed five distinct phenomena that could be evidence for the impact theory.
.
Also so much circumstantial evidence, such as the Copper trade routes, the variation in origin stories of the Americans, and geophysical features around the Great Lakes are better explained by an impact hypothesis than by no impact hypothesis.  I am one member of the scientific community that believes the impact hypothesis deserves to be considered.
.
You may reach your own conclusions, but please consider all the evidence]
____________________________
Donna Stehling, Madison, WI, reported in December 2012:
.

Near Madison, Wisconsin, archaeology evidence indicates that Ice Age people lived in rock shelters. They watched for strangers and game from pits high in the bluffs.
.
Also a few years ago an elder in the Ho-Chunk Nation began to tell stories from The Time the Ice Walked on the Ground.
.
The local geology supports the Ho Chuck Elder’s stories. The last Wisconsin glacier - the Green Bay Lobe - failed a few miles south of Madison, WI. Glacial Lake Wisconsin began emptying out.  The lake overfilled Glacial Lake Merrimac.   Lake Merrimac blew through the Johnstown Moraine.  This erosion caused the Wisconsin River to re-route.
.
All this terrain evidence can be seen on the ground. There are supportive carbon dates from buried debris. There is even a skull of the Bison bison occidentals. The fire keepers (observers of nature, sky--keepers of skills and stories) warned their people to prepare because there was going to be a battle between the water and sky spirits.
.
The people were told to not witness the battle. They had to protect themselves. They were to prepare shelter for themselves in their pits high on the bluffs.  They were to have stocks of tools. They were told to prepare food for a long, difficult journey.
.
When they were given the signal, they ran to their pits, covered themselves and prayed to their creator. They did not uncover themselves until all was still.
.
The fire keepers had told the people that when they uncovered themselves, they would see the world they knew was no more.  They would need to leave to find another place.
.
The Ho Chunk stories could be a description of the Big Event.
_______________________________

.
A very persuasive body of evidence analyzed and published
by Firestone, West, and Warwick-Smith proposes that a comet
impacted the ice sheet over around 13,000
years ago. It is remembered in the legends of many Native
American peoples.

This event contributed to the demise of North American large mammals and the culture. It nearly depopulated , thus leaving an empty land for subsequent peoples to fill. Note: There is no evidence
of culture above (younger than) the event debris.

A PDF file of the  introduction for the pre-history for the LENAPE Epic may be viewed at Changing the Paradigm.

Posted by LENAPE LAND at 3:06 PM No comments:

1. Long ago the fathers of the Lenape were at the land of spruce pines.
[Translation by Moravian priests, 1820]
1. Wulamo linapioken manup shinaking.

Before; the pure people certainly came,
to look where there was an abundance of rivers.


The stanza maker probably knew that a location named "spruce-pine" was similar to saying "anywhere and everywhere" but a location of many rivers with three major rivers coming in from the east and the west was a special place, which was located only at James Bay.


The Europeans tried to claim the land by naming the lakes, rivers, and mountains. Four (4) centuries after the French and then the English claimed the land, nine (9) of the rivers flowing into still have Lenape names.

Posted by LENAPE LAND at 4:38 PM No comments: